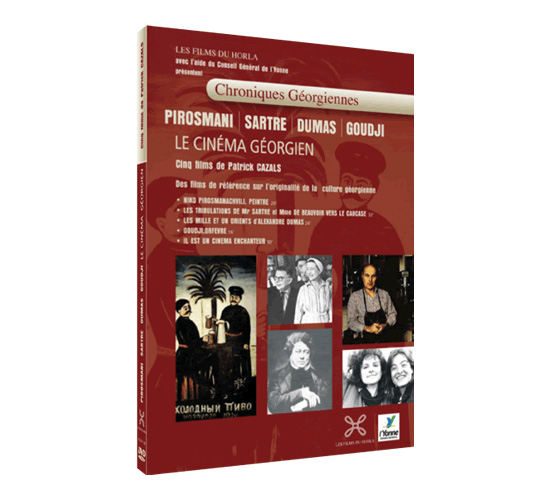 The film begins at the Monte-Cristo castle in Port-Marly, where Alexandre Dumas decided to start his incredible voyage throught Russia and the Caucasus.
The Monte-Cristo castle is a starting point in order to fix and illustrate the constant writer’s call for travel. His prolonged stay in Georgia and Tiflis is the heart of the film and allows various evocations and accounts. Dumas’ stay in Tiflis is for him the chance to discover the Orient with its caravanserais, bazaars, persian baths…
With Claude Schopp, Gaston Bouatchidzé, Claude Ribbe, Michel Angot, G.Sanikidzé…

Living in the old Tiflis (Tbilissi), Niko (Pirosmanachvili) Pirosmani was a remarkable artist from the beginning of the century.
He was a sign painter, a portraitist. He painted many frescos straight on the walls of taverns of the Georgian capital.
He is a symbol, the simple soul of Tbilissi, its artistic consciousness.
Shot in Mirzani, in Kakhetie (Pirosmani’s birthplace) and in Tbilissi, this film tends to seize the authentic Georgia and the loneliness of this unique creator.

This film is like the chronicle of strange travels and stays lived by Jean-Paul Sartre and Simone de Beauvoir in USSR and through Caucasus, in Georgia and in Armenia, during 1963-1965 summers.
Unflagging by Simone de Beauvoir’s account published in her book Tout compte fait, the film shows those unchanged caucasian landscapes in forty years, even if the two transcaucasian republics have had the experience of USSR break down,wars and earthquakes.
From Tbilissi to Erevan and Vilnius, Alexandre Toptchyan, writer, Mzia Bakradzé, teacher at Tbilissi University, Antanas Sutkus, photographer and other witnesses of that period take turns to relate these misunderstood escapades censured by soviet media but followed by political police…

The Occidentals discovered the Georgian Cinema through the works oh Otar Iosseliani, Tenguiz Abouladzé, the Chenguelal Brothers, Nana Djordjazé. They depict a strange accuracy and truth about the human conditions and humorous themes necessary to each and everyone to survive in an hostile society.
Without a doubt, it’s this cinema which enabled the ex USSR’s one to start the cultural revolution.
Which are the secrets to this success and will it be able to cross the continual Georgian political crisis?

The art of enamel on gold is considered in the Caucasus as the top of decorative Arts of the ancient kingdom of Georgia.
The mystery of the making of the enamel pieces is complete.
In Paris, Goudji a Georgian goldsmith, draws his inspiration from the ancient craft industry named Colchide and creates objects made of gold and silver, jewels, table ornaments of a rare beauty.
In his studio in Rue Lepic, we discover his creations and in front of the camera he gives away some of his secrets.