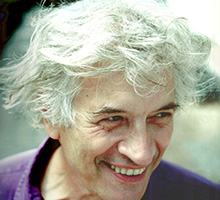 Created in Februrary 1987 by Patrick Cazals, LES FILMS DU HORLAbecame a limited liability company with a fixed capital of 11 433,68 euros in the summer of 1994.

Its Paris office is at 15 rue Laugier 95100 ARGENTEUIL
Its manager is Claudine Arnould-Cazals.

It produces its films in France as well as abroad, particularly in India, Africa, the USA, the Carribean Islands and the Caucasus.

As a film-maker and producer, Patrick Cazals has been the author of more than fifty documentaries since 1976.

As a director and journalist, he contributed to Libération, a daily, from 1988 to 1993, to Cahiers du Cinéma from 1988 to 1992 and to Radio France-France Culture from 1990 to 2000. He has written several works among which Musidora, la dixième muse (H.Veyrier), Sergueï Paradjanov (Cahiers du Cinéma), Aventures et Légendes des Troubadours and Contes et Légendes d’Occitanie (published by Nathan).

In 1987 he created the producing house LES FILMS DU HORLA and ever since he has devoted himself to the direction of creative documentaries, experimental films, and portraits of artists and writers.
Among his latest films :