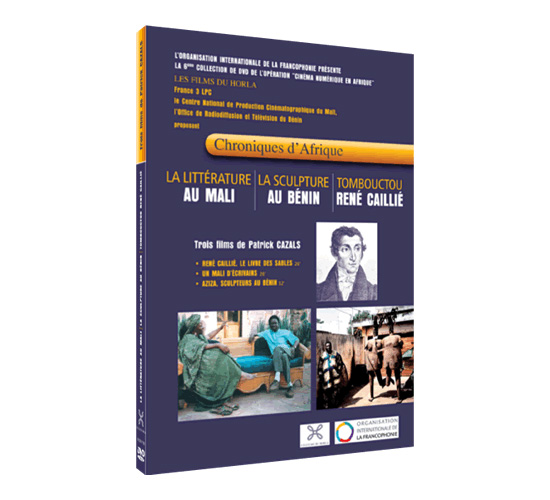 This film relates René Caillié’s journey. A child from Mauzé-sur-le-Mignon, a small village of the Deux-Sèvres, who learned the language of the Moors in Sénégal in 1824 before going to Timbuktoo that he would reach in 1828 and come back unharmed.
He was the first europeen to succeed such feat. It deals with tone of the amoziest human adventure of the nineteenth century.
This film is based on the Journal de Voyage-Journal des Sables, written by René Caillié and beautiful landscapes filmed from Djenné to Timbuktoo. With evidence given by Michel Bossuet, René Caillié’s biographer, Alain Quella-Villéger, author of the book René Caillié, a life for Timbuktoo, Bernard Slavaing, headmaster of the Africain Studies at the Sorbonne University, Ali Ould Sidi, leader of the Cultural mission in Timbuktoo.

The film seeks to show how good litterature, as supported by true freedom of expression, can exist in an African nation aspiring to democracy.
Writers and publishers living in Bamako and other regions of Mali talk about literary life and the recent history of their country. All ponder their status as writers, the usefulness and reality of Malian and African literature, and, for some, the difficulty they have in creating an œuvre haunted by the specter of French language.
Moussa Konaté,Mandé Alpha Diarra, Amin-ata Traoré, Albakaye Ousmane Kounta, Aïda Diallo, Hassan Kansaye give evidence.

This film is a sort of travel to meet Béninian contemporary artists very implicated in cultural heritage of their country.
Concerned by the modernity of their work and by the economic expansion of Benin, they try to avoid in their art the usual sclerosis generated by the rituals and the tradition.
Georges Adéagbo, Dominique Kouas, Calixte Dakpogan, Cyprien Tokoudagba, Romuald Hazoumé work towards their quests in Cotonou, Porto Novo, Abomey but also in the greatest exhibitions in the world ( Osaka, Venise, Sao Paulo, Kassel…).
Writers from Benin (Joseph Adandé, Florent Couao Zotti) help us for the discovery of Béninian contemporary art, very close to the vodun worship as well as Gou sculpture shown in one of African halls in Musée du Louvre.