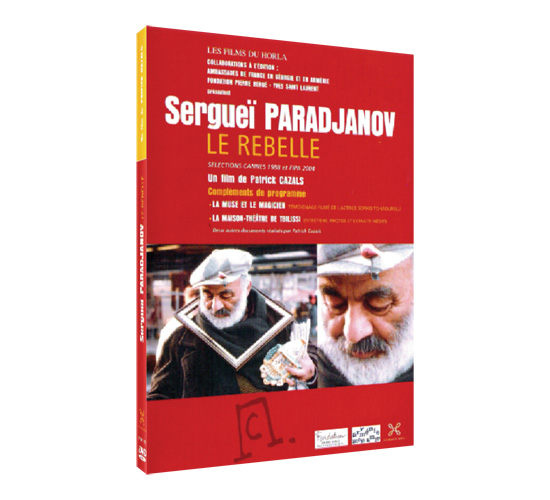 Georgian-Armenian filmmaker who was born in Tbilissi (Georgia) and died in July 1990, Paradjanov is considered as one of the greatest contemporary film makers. He leaves an unfinished but essential work for Soviet and Russian film history. His work reflects the ethnic wealth of the Caucasian people.
This film was shot at his strange residence, both workshop and capharnaüm, on the set of his last film ASHIK KERIB, in Erevan’s Paradjanov museum, in Paris and Tbilissi.
This portrait of a wounded but fiercely independent artist deals too with his various talents ( painter, decorator, designer…).

THE MUSE AND THE MAGICIAN. 13 min

Sofiko Tchiaourelli was Sergueï Paradjanov’s muse and actress whose role in Sayat Nova – Pomegranate was very decisive. Se was also Mikhaël Tchiaourelli’s daughter who was himself very involved in the Soviet Cinema under Staline’s government.The actress Veriko Andzapanidzé was her mother. Sofiko Tchiaourelli created a small theatre in her house and talks about her friendship with Sergueï Paradjanov in this document.
It’s one of her last interviews before her death in February 2008.

THE HOUSE-THEATRE OF TBILISSI. 12 min

In this exclusive interview, Sergueï Paradjanov talks about the story of his house in Tbilissi, his family origins, how he met Lily Brik and the scenario of his last film entitled Confession , which shooting has been stopped suddenly, after three days, because of serious health problems. Many pictures from his albums and photographs of the film maker complete this document.