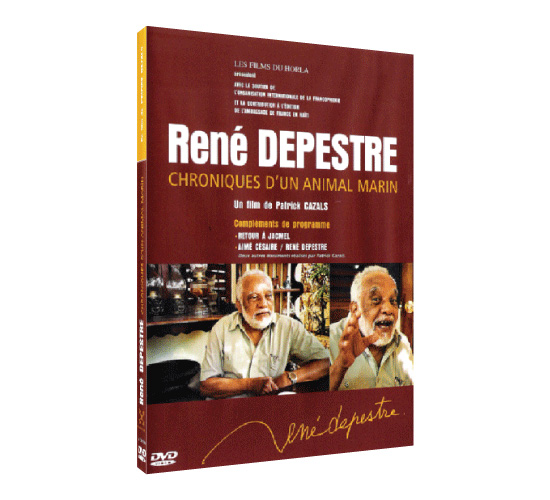 In 1804, Haïti became the first black colony to win its independance.
In 2004, from his adopted town in France at the foot of the Corbières, the poet-writer René Depestre – the prolific author of such works as Encore une mer à traverser, Non-assistance à personne en danger and Hadriana dans tous mes rêves – reflects on the tragic fate of his native island,on his works and his own journey through the century…
At the young age of 19, Depestre published his first collection of poems, Etincelles, which earned him instant recognition. As a member of the revolutionary student movment of 1946,he was then arrested and emprisoned before being banished from the island; Over the course of his numerous travels – in France but also in Prague, Cuba, Austria, Chile, Argentina and Brazil – the nomadic poet crossed paths with many of the world’s leading political and literary figures : Breton,Eluard, Neruda, Aragon, Che Guevara, Fidel Castro, Mao, Ho Chi Min…
In the automn of his life, he remains an ardent witness, ever vigilant and unusually lucid.
Shot in Port-au-Prince and in Jacmel (his home town) in Haiti, in Fort-de-France,Prague, this film is interwoven with testimony from Aimé Césaire, Régis Debray, René de Obaldia, Maurice Pons, Yannick Lahens, Laënec Hurbon…

On February 2005, for the first time since sixty years, french-haïtian writer and poet Rene Depestre comes back to Jacmel, his birthplace,a small town in Haïti. He enjoys visiting all the places he cherised during his childhood, so determining for his work. He gives several successful conferences. He remembers his path with all his friends.

In his office of Fort de France’s emeritus mayor, on the first floor of the City Theater, Aimé Cesaire tells us about his itinerary as a poet and a militant.
He highlights his great friends René Depestre and Léopold Sédar Senghor, reads and comments on his greatest book : Cahier d’un retour au pays natal.