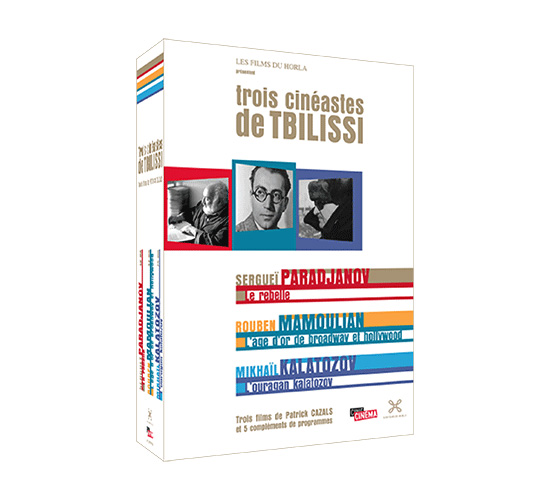 Georgian-Armenian filmmaker who was born in Tbilissi (Georgia) and died in July 1990, Paradjanov is considered as one of the greatest contemporary film makers. He leaves an unfinished but essential work for Soviet and Russian film history. His work reflects the ethnic wealth of the Caucasian people.
This film was shot at his strange residence, both workshop and capharnaüm, on the set of his last film ASHIK KERIB, in Erevan’s Paradjanov museum, in Paris and Tbilissi.
This portrait of a wounded but fiercely independent artist deals too with his various talents ( painter, decorator, designer…).

Armenian – American director Rouben Mamoulian,who was born in Tbilissi, Georgia, in 1897, and died in Hollywood in 1987 was one of the pionners of the Broadway musical theater and the Golden Age of Hollywood.
He directed Greta Garbo (Queen Christin), Maurice Chevalier (Love me tonight), Marlène Dietrich Gary Cooper (City Streets), Rita Hayworth (Blood and sand) in some of their finest roles. He made such amazing pictures as Mark of Zorro and Dr Jekyll and Mr Hide and enriched the early talkies with his daring innovations.
To mark the 20th anniversary of his death and Armenia Year in France, this film looks back at Mamoulian’s dense,complex carrer.
This document, which takes place in Tbilissi, Rochester, New York, Los Angeles but also in Paris reminds the audience about Mamoulian’s talent in having enriched the cinema with his romantic sensitiveness and imagination as many other strong personalities from central and oriental Europe such as Michaël Curtiz or Ernst Lubitsch exposed in their art.

In bringing the USSR the Palme d’Or of the 1958 Cannes Film Festival for his masterpiece The Cranes are flying , Georgian-born director Mikhaïl Kalatozov opened an unprecedented breach in the blandness of Soviet film production and moved millions of spectators and future filmmakers…His brilliant cameraman, Sergey Urussevski, remained faithful to him for other adventures, in particular Soy Cuba, an epic ciné-poem exhumed by Scorsese and Coppola. Shot in Moscou, Tbilissi, Havana Honfleur and Paris, this film looks back at Kalatozov’complex course , very much implicated in the political, cultural and diplomatic history of the ex-USSR . With Claudia Cardinale, Enrique Pineda Barnet, Miguel Mendoza, Raul Rodriguez, Sam Wood, Kirill Razlogov, Sergueï Kapterev, Valérie Pozner, Françoise Navailh.